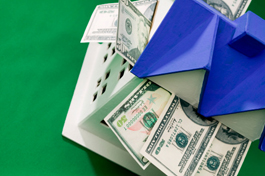 Home prices in major U.S. cities increased in May for the second consecutive month, according to a closely watched index, although experts dismissed the uptick as seasonal while separate reports provided fresh evidence of a weak housing market.

The Standard & Poor’s/Case-Shiller index of home prices in 20 metropolitan areas rose 1 percent from April to May when left unadjusted for seasonal variations.

Prices often rise in spring because of changes in the types of homes selling: Foreclosures make up a higher proportion of sales during the winter as families take a break from home shopping and cash-rich investors dominate the market. Higher sales volumes also push up prices.

But compared with May 2010, home prices slid 4.5 percent, according to the index released Tuesday.

“Year-over-year, prices continue to deteriorate, although there has been a seasonal uptick over recent months,” says Stuart Gabriel, director of the Ziman Center for Real Estate at the University of California-Los Angeles. “This reflects a market that continues to be in search of a bottom.”

Chris G. Christopher Jr., an economist with consulting firm IHS Global Insight, said in a research note that the seasonal kick in prices will probably fade by October.

“Things do not look very favorable on the housing front since the employment situation has taken a turn for the worse in May and June,” he wrote. “The unemployment rate now stands at 9.2 percent, and consumer confidence is at depressed levels. Going forward, the Case-Shiller indexes are likely to post increases during the home-buying season, and then turn down again.”

The housing market began a renewed decline last year after the expiration of federal tax credits and has been limping along ever since. In March, home prices fell below their recession-era low, hit in April 2009, confirming a much-expected double-dip. Values have ticked up slightly since then.

One factor keeping housing weak is the high number of homes in foreclosure or headed into the foreclosure process. Then there’s the stalled jobs market, weak consumer confidence in the economy’s direction and the significant number of people saddled with mortgage debt that exceeds the value of their homes.

A separate report released Tuesday by Santa Ana, Calif., research firm CoreLogic indicated that the nation’s housing market is hampering the broader U.S. economic recovery. The report said that while several temporary factors have contributed to a slowing recovery, including high gas prices, U.S. floods and fading stimulus programs, “fundamentally, the recent slower economic growth illustrates that as the housing market goes, so does the economy.”

Housing influences the economy directly through residential construction, which typically gives a recovery a key boost. But with stiff competition from foreclosures, sales of new homes have been very weak for more than a year.