You may be married to your gay partner and not even know it!

As of May 2014, if you live in Rhode Island or the District of Columbia you are eligible to establish same-sex common law marriages. The basic legal requirements include that the parties must be of legal age, must be mentally capable of entering into a contract and must not already be married to another person. 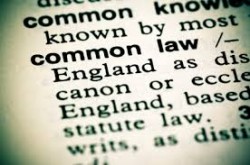 Rhode Island revised its marriage statutes in 2013 to make them gender-neutral. If a same-sex couple intends to be married, holds themselves out as married to the public and if they live together, their common-law marriage is valid. There is no time limit. Whether the requirements are met in a period of one month or two years, couples can be considered legally married.

The District of Columbia revised its marriage laws in 2009 to make them gender-neutral. This resulted in same-sex couples becoming eligible to establish common-law marriages if they meet the legal criteria including the intent to be married, holding themselves out to the public as being married and they are living together. The District of Columbia does not include a time limit that couples must live together before meeting the criteria for common law marriage.

If you enter into a common-law marriage in a state that allows it, your marriage will be valid in any other state that recognizes same-sex marriages. Those states currently include: California, Connecticut, Delaware, District of Columbia, Hawaii, Iowa, Maine, Maryland, Massachusetts, Minnesota, New Hampshire, New Jersey, New Mexico, New York, Oregon, Rhode Island, Vermont and Washington. Same-sex marriages will be legal in Illinois effective June 1, 2014.

Common law marriages are as valid as licensed marriages and are subject to the same obligations and benefits including inheritance, insurance and social security survivor benefits. These types of marriages can only be dissolved through death of one of the parties or through a legal divorce.

Same-sex laws are continually changing. If you intend to move to another state, it is advisable to check that state’s statutes to find out if same-sex marriages are recognized.

Thinning Out Your Possessions When Moving

Should you Fire your Realtor?