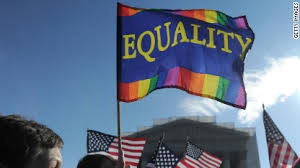 Now that Section 3 of DOMA (Defense of Marriage Act) has been struck down by the U.S. Supreme Court, the best states for LGBT couples to move to are those that recognize gay marriage and that are in alignment with the new federal ruling.  Financial experts, like the out MSNBC money expert Suze Orman has predicted that this will result in a flight of gay people from states that are not in agreement with DOMA strike-down, to greener pastures.  Many gay couples will see no reason to handicap themselves by offering their valued human resources, including their ability to invest in real estate, to communities that are in conflict with the LGBT entitlement to basic constitutional rights.

As of July 2013, eleven state governments those of Maine, Maryland, Washington, Delaware, Massachusetts, New York, California, Connecticut, Iowa, Vermont, New Hampshire and the District of Columbia are the best options. Rhode Island and Minnesota will join the roster of states that approve gay marriage on August 1, 2013.

There are also many Indigenous nations that recognize gay marriage including the Coquille Indian Tribe, the Suquamish Tribe, the Lite Traverse Baby Bands of Odawa Indians, the Pokagon Band of Potawami Indians and the Iipay Nation of Ysabel.

If you’re married and you move to, or live in any of the other states (not recognizing gay marriage) you may find that there is a great deal of confusion when it comes to filing your state and federal tax returns as you will be recognized as a couple federally and not locally.  This will also affect simple procedures like going to the bank to get a mortgage together. It is also not helpful that the Supreme Court ruling made it optional for states to recognize a legal marriage status that was established elsewhere in the country.

One of the areas where the new ruling will have the most impact is the transfer of assets, including real estate assets, after one spouse dies. With DOMA struck down, same sex spouses can now make unlimited transfer of assets to each other without incurring any federal gift tax or estate tax. This is extended to same sex married couples that live in states that recognize gay marriages ~ however if you do not live in one of these states you may not be entitled to this as the IRS is still clarifying its post-DOMA guidance.

By August 1, 2013 Minnesota and Rhode Island will be recognizing gay marriage as legal. That means if you’re a same sex couple, you’re treated the same as heterosexuals for purposes of state death taxes.  This also means that these state are “safer” to buy a house in but not necessarily partisan to all of the benefits and rights that should, constitutionally, belong to everyone who is bereaved and lives anywhere in the U.S.