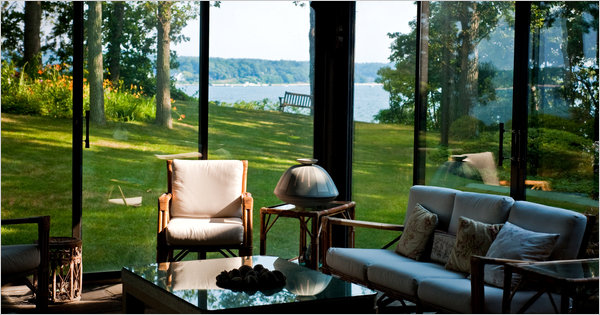 JACQUELINE LEWISY, a saleswoman with Signature Premier Properties in Northport,  steered her 19-foot Sea Ray through Northport Harbor toward Duck Island, an hourglass-shaped peninsula linked by a private road to the isthmus here. The view from the water was part of her tour of Duck Island Way, a secluded 21.7-acre estate with private beaches, lush woods, and an 11-bedroom 1929 shingled Swedish manor house. The property also has a three-bedroom guest cottage; a barn with a one-bedroom loft; a baseball field; and a pond. “How can you not fall in love with this?” Ms. Lewisy asked.

To the west, Lloyd Harbor and Huntington Bay were peppered with sailboats, yacht clubs and marinas. Long Island Sound was visible to the north and east. Waterfront property has long been prime real estate, from Kings Point estates with views of Manhattan, to Centre Island spreads with tranquil views of Oyster Bay Harbor. On the Great South Bay, $400,000 bungalows are coveted in Lindenhurst, and grander residences sell for more than $2 million on Carlls River in Babylon Village. In the Hamptons, south of Route 27, oceanfront mansions command stratospheric prices.

“The more expensive the area, the bigger the premium” for waterfront, starting at 10 percent, said Dorothy Herman, the president and chief executive of Prudential Douglas Elliman.

But across the price spectrum available to waterfront enthusiasts in all the Island’s many different waterfront locations, these days such properties are taking longer to find buyers. North Shore real estate, generally far more expensive than that on the South Shore, tends to linger for that reason alone. The South Shore has different issues: buyers with more limited incomes, who are more susceptible to concerns about the costs of flood insurance and maintenance.

Jim Crary’s family has a history on the North Shore. They have owned the Duck Island estate for four generations. He described it as “a place out of time,” with the feeling of “being on the prow of a big ship.” Yet despite its setting and views, it didn’t generate much interest until  recently, when, after four months, Ms. Lewisy dropped the asking price to $8 million from $12 million.

“It is a tough market for waterfront property,” Ms. Lewisy said. But the dip in prices over all makes it “an opportunity for someone who does have the money to get their dream.”

In Nassau during the first six months of the year, 102 waterfront homes sold or went into contract, with an average price of $1,010,595. For the 11 of them on the North Shore, sale prices averaged $2,582,500, said Gary Baumann, the manager of  Prudential Douglas Elliman’s Ronkonkoma office, using Multiple Listing Service of Long Island data.  Of the 91 homes that sold on the South Shore, excluding the Hamptons, the average price was $721,878. (In the second quarter of this year, the average sales price of all homes on the Island was $436,143.)

Deborah Hauser, an associate broker at Daniel Gale Sotheby’s office of Cold Spring Harbor on the North Shore, said that homes with deepwater docks, which are difficult to get permits for, carry a $1 million premium, and that with inventory scant, they sell “right away.”

But Carolina Boucos of Daniel Gale’s office in Glen Head, which is not as far east as Cold Spring Harbor, finds some buyers shying away. At her $1.699 million waterfront listing in Glen Cove, shoppers have been “afraid of a northeaster coming,” and have also expressed concern about wear and tear from saltwater, and pricey flood and homeowner insurance.

In Atlantic Beach, Annett C. Ellis, a boutique broker, described a different kind of micromarket, seeing waterfront as “hot, hot, hot.” Whether oceanfront, or bayfront on Reynolds Channel, “they are selling and they are in demand and they are getting great prices,”  with “a lot of cash buyers.” She ascribed the boom to the village’s easy access to the city. “The Hamptons is too far,” Ms. Ellis said, “and they get tired of sitting in traffic.” From Atlantic Beach, “they can commute back and forth daily.” Prices start at $417,000, for a bungalow, and exceed $3 million, she said.

On the South Shore in western Suffolk, said Georgia Westcott, broker-owner of Westcott Group Realty, all waterfront is not created equal. For boaters, homes on deep, wide canals with protected slips can carry a premium of  $30,000 to $50,000 and be more desirable than bayfront property exposed to storms. A Jet Ski lift and room for kayaks and rowboats ups the ante.

Yet “on the South Shore, when you buy a waterfront home,” Ms. Westcott said, “you give up privacy,” because lots are smaller and closer together. “When you find an acre or a treed property it is very much a commodity,” she said, citing her $2.9 million listing for a four-bedroom home on 1.8 acres on Carlls River in Babylon. The place has a dock, a protected yacht slip and a sandy beach.

Also, in a place like Lindenhurst, a more middle-class area at greater risk of flooding than the North Shore, the $2,000 to $2,500 annual cost of flood insurance can be a deterrent.