LIFE ON RAINBOW STREET: LGBTQ+ Superheroes and Where they Live 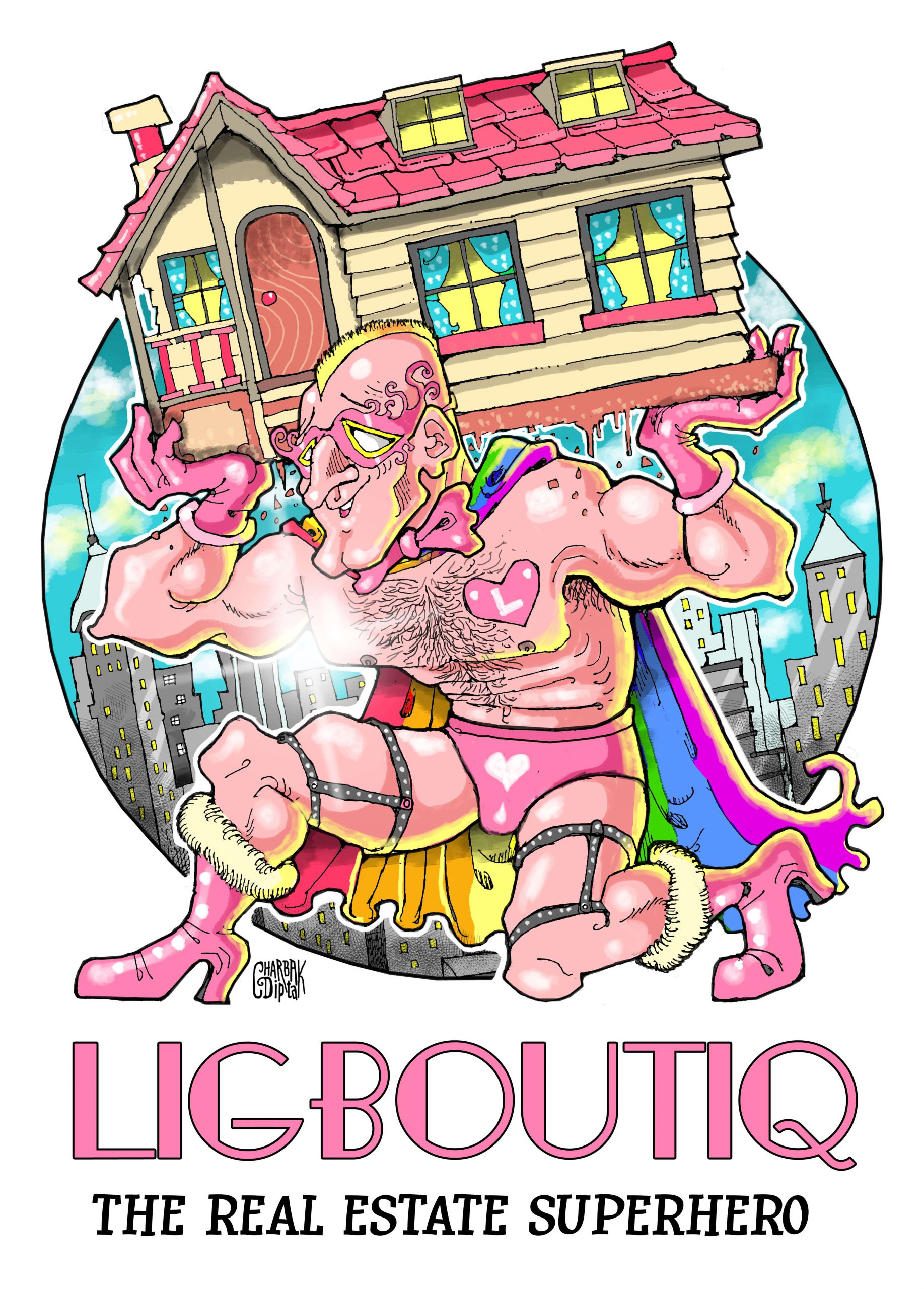 It’s been refreshing to see more and more LGBTQ+ superheroes living out in the open over the years and being embraced in mainstream culture. Though we’re still awaiting better representation in the Marvel and DC movies, the comics and TV series are certainly embracing the diversity of our world (and beyond).

But where the sexuality of our superheroes may be more diverse, what about their geographical locations? It’s all well and good having a dozen LGBTQ+ superheroes but not if they all live in an underground rainbow bunker on the outskirts of Gotham city.

So, we’re here to investigate the whereabouts of some popular LGBTQ+ superheroes and determine where the best Superhero Gayborhoods and pride parades are likely to be.

Batwoman (Kane Kane) is part of the DC comics universe and was first introduced as a love interest for Batman in the 1950’s. More recently, however, she has become a lesbian icon and the character in the recent TV series on the CW network, played by Ruby Rose, came out in an episode in January of this year.

Romantically, Kate Kane has been linked to the law with two girlfriends, one being Renee Montoya, who, interestingly, became a superhero in her own right named Question after leaving the Gotham City Police Department.

She’s also dated Maggie Sawyer, who was transferred from the Metropolis Crimes Unit to the Gotham City Police Department in the 00’s. Yes, Batwoman has a thing for women who like to uphold the law, it seems.

Though initially unaware of her girlfriend’s identity, when Kate proposes to her as Bathwoman in an issue of the comics, the deep level of trust in their relationship is clear.

Where do they live? Batwoman, like many DC heroes, lives in Gotham city. It is mentioned in the comics that she lives in a penthouse, which no doubt has a fully equipped gymnasium for her training.

Who are they? Deadpool (Wade Wilson) exists within the Marvel X-Men universe. He’s an assassin turned mercenary who was disfigured when he underwent invasive treatment for his terminal cancer diagnosis. The good news is that the treatment worked, the bad news, it left him with severe burns and scars. But on the upside, he can now regenerate limbs and heal himself in a matter of moments. Impressive!

Deadpool has been deemed an antihero. His sarcastic wit and meta ability to know that he’s a comic book character means he often breaks the fourth wall with a comical quip about the situations he gets himself into. Remember the show Moonlighting? It’s like that but with swords.

Much like his approach to life, Deadpool is up for anything where his sexuality is concerned, and he was confirmed as pansexual in 2013. Though his true love is Vanessa Carlyle.

Where do they live? Originally from Canada,Deadpool is now often placed as living in the Bronx, New York, or an area very like the Bronx.

He doesn’t seem hugely concerned with personal possessions or keeping a nice house, maybe because every time he tries to settle down something comes along to royally F*** it up?

He’s also been linked to living at the Avengers mansion in Manhattan. We can only assume the cleaner prefers when he’s not in residence.

Who are they? Valkyrie (Samantha Parrington) is a goddess and Asgardian warrior who can sense death and possesses superhuman strength, abilities and stamina. She began life in New York city as an average “muggle” until she suddenly found herself mysteriously awarded with the power of the Asgardian Brunnhilde after getting caught up in a mystical battle between ancient beings. (As you do.)

In the comics Valkyrie is portrayed as bisexual and has been in a relationship with Annabelle Riggs. Director Taika Waititi considered using this thread in a scene in Thor:Ragnarok, but it had to be cut for time. (Well, when a movie is already 9 hours long and all…) But we live in hope we’ll see more of this story unfold in further films.

Where do they live? Since gaining her powers, Valkyrie has now relocated to Asgard where she can enjoy the Asgardian climate, polish her mystical sword, Dragonfang, and tend to her beloved Pegasus.

Who are they? Alan Scott is the first character in the DC universe to bear the name Green Lantern, first appearing in the comics in 1940.

However, in 2012, Alan Scott was reimagined as gay in the Earth 2 comic series.

In this version, Scott and his partner Sam are involved in a train wreck when a railroad-bridge collapses. Alan survives but Sam is killed. While he lies amongst the rubble, he is encompassed by a magical green flame which instructs him to channel a power through the flame with something close to his heart. Alan opts for the engagement ring he was going to use to propose to Sam, and so becomes Green Lantern, where be obtains a number of impressive powers including flight and telekinetic control.

Where do they live? Scott’s Green Lantern resides in the fictional universe known as Earth 2, a physical twin of earth with a compatible ecosystem that was developed over time and has been home to a number of well-known DC heroes.

We may not have access to Earth 2, but we can only hope its faring better than our own currently is.

Who are they? Not only can she punch her way into other dimensions and is virtually invulnerable, Miss America/America Chavez is the first LGBTQ+ Latin X female superhero to have her own comic book series titled America, making her impressive all round.

She’s been a member of the Teen Brigade and the Young Avengers and has had more than her fair share of run in’s with Asgardian genderfluid scamp, Loki. She is now a member of the West Coast Avengers, which is much more climate friendly on the whole.

America is a lesbian and has had run ins with her ex, Magdalena. She’s not attached to anyone significant, but since meeting Kate “Hawkeye” Bishop in the Young Avengers, their relationship certainly has a chemistry that fans are keeping a close eye on.

Where do they live? It stands to reason someone as badass as this probably didn’t hail from the limitations provided by earth. America was raised in the Utopian Parallel, a dimension out of time and space, by her lesbian mothers, Amalia and Elena. These days, I think it’s safe to say we can call America somewhat a “drifter”. With her capabilities, she spends a lot of time moving between universes and dimensions. Though, there does always seem to be some weird force that gravitates many of our superheroes to New York…where she has been on a number of occasions, so we can assume she at least has a small apartment here with an empty closet for easy dimension access. And given her membership of the West Coast Avengers, we also assume she has an airy beach house on the California coast.

So, it would seem that if you are hoping to run into an LGBTQ+ superhero while you’re out for your morning run, your best chances are New York, Gotham and the California coast. We’re not quite sure of Gotham’s co-ordinates, but what we do know is that house insurance costs a fortune, so if you want some free advice, maybe don’t buy there!

And if you value a long, healthy life, maybe don’t live in Superhero New York. We hear it’s currently being rebuilt…again!

In our books, real estate superheroes are every LGBTQ realtor we have representing our community at www.GayRealEstate.com. Our origin story, like any superhero worth their cape, was born out of tragedy – our LGBTQ community was not being fully represented when it came time to buy or sell a home. Even worse, oftentimes the villains were only interested in earning a commission, holding their nose during the entire process.  We wanted to be sure that members of our community could be assured fair, equal, and honest representation by people who understand the unique needs and represent the highest and best interests of our amazing community.

Blazing the Trail Ahead of the Equality Act

Co-Working and Co-Existing in the New Home […]

Need a little guidance on finding and purchasing t

Arizona is known for its desert beauty, southweste

Buying a home is a major milestone and an importan

You and your partner have made the choice to sell

Daydreaming about that property in a new city? Rel

Wrestling with the decision if now is the right ti

With low-mortgage rates and plenty of homes on the

When you're planning to sell your home, figuring o