Thinking about moving to Wisconsin? The state may not be known as a beacon of hope for the LGBTQ community, but it also doesn’t have a negative reputation. In fact, it’s a fairly neutral state. That said, there are a number of cities here that are very welcoming and progressive. If you’re considering a move to America’s Dairyland, as it’s sometimes called, here are some towns and cities to think about. Many are home to gay and lesbian real estate agents who can help you find your dream home.

One of the most well-known cities in Wisconsin, Milwaukee is known for being the home of the Green Bay Packers football team. It’s also the home of PrideFest Milwaukee and a number of LGBTQ events and businesses. In fact, many in Milwaukee identify as progressive, open-minded individuals. The housing market in the city has recently undergone several changes. The downtown area has been revitalized, and a number of neighborhoods are experiencing gentrification. While that means housing prices have gone up, it also means the properties here are in great condition.

Another large city, Madison is often considered Wisconsin’s my LGBTQ-friendly area. In fact, The Advocate has recognized the city as one of the most welcoming in the country. As the capitol of the state, Madison is a fairly large city with many different events and activities. There are some great LGBTQ-owned businesses here, plus you can take advantage of the local LGBTQ community center, too. With an average age in the 30s, many in Madison are young professionals who are ready to seize the future.

Eau Claire is another city where the average age is fairly young. This is mostly because it’s the home of the University of Wisconsin – Eau Claire, which attracts many students from around the country. The city is known for being a gay getaway, especially during the annual Chippewa Valley Pride festival.

Another college town, Oshkosh is also home to a branch of the University of Wisconsin. While its median age may be a bit older than Madison or Eau Claire, it’s still young enough that the city overall is very welcoming and liberal. You can visit a number of different LGBTQ businesses here, including a few bars and clubs.

Superior is located in the northern part of the state and is great for those who love the outdoors. Of course, that also means it has some pretty cold winters, but if that doesn’t bother you, Superior is a great place to live. It and its sister city, Duluth, host a combined Pride festival every year.

Making the move to Kentucky can be the right decision for LGBTQ families. Even though the state is a part of the more conservative south, that doesn’t mean there aren’t some great places to live here. Kentucky is home to a number of cities that welcome everyone regardless of gender identity or sexual orientation. If you’re looking at Kentucky as your next home, here are some of the best places to live.

Lexington, Kentucky, is a good-sized city that features a number of LGBTQ bars and other, similar businesses. Lexington is actually known for being a very diverse and accepting city. Moving here can be a great move, especially if you want to live in a larger city that still feels somewhat like a small town. Every year, you can attend the local pride parade and enjoy a number of other festivals. Housing prices here aren’t so bad, either, especially if you look in some of the more up-and-coming neighborhoods instead of those that are currently popular.

Newport, which is located near the border of Kentucky and Ohio, also has its own LGBTQ businesses, clubs, and bars. It’s close enough to Cincinnati that the two share many of their gay and lesbian events. Many residents step across state lines to visit the Gay and Lesbian Community Center in Cincy, while some stay in Newport to enjoy everything it has to offer.

The capital of the state, Frankfort, welcomes people from all walks of life. LGBTQ residents can enjoy the annual pride festival, features a number of different businesses that cater to the gay and lesbian community, and hosts many other events that residents enjoy. Housing prices are very reasonable here, too. It’s not unusual to find good-sized houses in the city for much less than you’d pay in other states.

Campbellsville takes its name from Andrew Campbell, who founded it in 1817. Today, the city is known for being home to Campbellsville University. If you’re on the search for a college town, this could be the home for you. The historic downtown area is gorgeous, and many people take weekend trips to enjoy the scenery at Green River Lake State Park during the warm months. Because the university attracts many of the more progressive younger generation, LGBTQ individuals find that living in Campbellsville comfortable and easy.

These are just a few of the different cities in Kentucky that you might want to call home. Check with a gay or lesbian real estate professional to learn about other great places to live in the state.

You’ve probably heard of gentrification, the term for when a run-down neighborhood is built back up until it attracts residents who are more affluent. Often, this means those who used to live there are unable to afford the area and are forced to move to a cheaper place. Recently, another, related term has been coined: gaytrification. It’s basically the same idea as gentrification, but it’s occurring in gay ghettos and neighborhoods across the country.

The Founding of the Gay Neighborhood 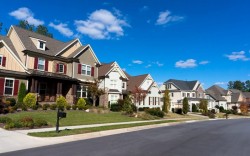 During the 70s and 80s, most LGBTQ people were in the closet. Discrimination was very real, and many who were out or even hinted at being out were denied rental properties or housing. Many found that they were only really accepted if they lived near other like-minded individuals. Since they weren’t always able to find housing in the more popular parts of cities, they ended up moving into the less desirable neighborhoods. These were the first gay villages.

But while they may have moved into run-down houses and old apartments, it wasn’t always because they lacked money. These modest mortgage payments meant these LGBTQ homeowners were able to put more money towards renovations, transforming areas that were once somewhat abandoned into gorgeous neighborhoods.

It’s Not a Thing of the Past

Today, these older gay neighborhoods such as San Francisco’s Castro District or Chicago’s Boystown are quite pricy. Many people can’t really afford to buy a house there, while those who did purchase a home with prices were lower don’t want to sell. These areas have definitely gentrified, but the process is still going on. When they’re unable to purchase homes in the traditional gay villages, LGBTQ homebuyers may start to congregate in a new area of the city, starting the process of gaytrification all over again.

It’s definitely a stereotype to say that any LGBTQ homeowner is going to transform their property into a shining house worth millions, but it does certainly happen. Part of the reason these areas grow so quickly is that where the LGBTQ homeowners go, the businesses that cater to them follow. Bars, clubs, and other businesses owned by LGBTQ entrepreneurs help build up these neighborhoods, bringing in more revenue and developers.

While gay neighborhoods haven’t been growing as quickly now that LGBTQ acceptance has become more popular, they do still exist. A gay or lesbian real estate agent can help you find one of these areas if you’re looking to move into one.