Maryland is a great state to live in—it’s near Washington, D.C. and within driving distance of New York City, Philadelphia, and other major East Coast metro areas. The state capital of Baltimore is home to a large number of people itself, and the state’s economy is so good that it has the lowest poverty rate in the U.S. Much of this has to do with the fact that many work in Washington, D.C. or in the satellite government offices and other installations in the state.

Maryland also has a number of protections for its LGBT citizens. The state’s supreme court overturned the laws that made consensual sexual activities between two adults in 1998 and 1999 While this was only a few years before Lawrence v. Texas invalidated those laws nationwide, the people of Maryland did at least see that these laws were unconstitutional.

While the state was on the late side in dealing with sexual activity, they were unfortunately on the early side in banning same-sex marriage. State legislators actually amended their Family Law statutes in 1972 to prohibit marriage between same-sex individuals.

In 2013, that changed. The previous year, a same-sex marriage bill was introduced and later approved by both the House and the Senate. It was then approved by the voters and, on January 1, 2013, same-sex couples began marrying in the state. Maryland became the first state where gay marriage was approved by the voters rather than by court order. Prior to that, the state did have domestic partnerships starting in 2008, but they were somewhat limited.

In 2015, the General Assembly approved a law that required all health insurers to provide fertility treatments in their general health benefits package regardless of the orientation of the person undergoing the treatment. While the state’s governor refused to sign the bill, he did not veto it, making it law.

Anyone in Maryland can adopt children, and the law specifically states that same-sex couples are to be treated the same as any other co-parents.

Since 2001, state law has banned discrimination based on orientation, and that law was extended to include gender identity in 2014. Prior to statewide protection, two cities and three counties had passed their own anti-discrimination laws.

The state’s hate crime laws protect individuals based on both orientation and gender identity.

Finally, those who are transitioning from one gender to the other can change the gender on their birth certificate without the need to first have gender reassignment surgery. Like the fertility benefits law, the governor neither signed nor vetoed this bill.

Thinking about moving to Austin, Texas? It’s one of the South’s most progressive cities; in fact, it may be one of the most LGBT-friendly cities in the entire country. A lot of people who want to remain in Texas or the Southern part of the U.S. move to Austin because it is so welcoming. As with many LGBT people, you might ask your gay or lesbian real estate agent if the city has any gay neighborhoods. Some would say that all of Austin is a gay neighborhood, but there are some specific areas that tend to attract members of the LGBT community. Here are a few of these neighborhoods. 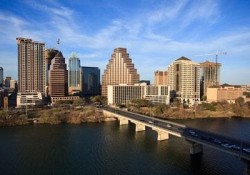 East Austin. Close to downtown, East Austin in an up and coming neighborhood that has recently risen to the top of this list. A number of new restaurants, clubs, and bars have opened in East Austin since its revitalization. While there are houses and condos for sale in the area, note that because of its increasing popularity, prices are going up.

Clarksville. An historic neighborhood, this area is near 6th Strete, one of Austin’s most famous entertainment districts. It has a very small town village feel to it, so it’s great for those who want to live in a large city, but yet don’t like the atmosphere that comes with that. You’ll find unique restaurants, boutiques, and other small shops here. As with East Austin, home prices may be a little higher than you’d like, but it’s because many of the houses are well-maintained historic homes.

The Downtown Area. Downtown Austin has a certain appeal to it, just like the downtown areas of any large city. Austin’s downtown is expanding and is now home to many restaurants, businesses, and outdoor areas. There’s always something going on here, and many LGBT men and women have decided to move into some of the new downtown housing so they don’t miss a minute of it.

Mueller. This area is actually fairly new—in 2005, the old airport was demolished and transformed into a neighborhood. The homes and buildings here were intentionally designed in the classic style so you’d never know the area was less than 20 years old. Mueller is only a few minutes from downtown, too.

Westlake. Set between the center of the city and the fringe area, Westlake has some of the biggest houses in the city. The school system is also often voted as the best in the city, making this neighborhood a draw for LGBT parents.

When LGBT people think about moving away from conservative states, most think of one of two places: New York and California. Both can be very expensive, but there are some places in each state that are actually fairly affordable. This is especially true of California. While cities like Los Angeles and San Francisco have very high real estate prices and costs of living in general, other cities are not quite as bad. California is also known for being a very liberal state and as the site of the defeat of Prop 8, one of the biggest battles in the fight for marriage equality.

Consenting adult laws have been on the books in the state since 1975, when all laws that made consensual same-sex sexual activity were repealed. The state also removed all gendered pronouns for paperwork and civil codes in 1971, but in 1977, the state legislation passed a Civil Code amendment that defined marriage between a man and a woman. Berkeley later became the first city in the state to create a domestic partnership for those employed by the city. The state later began offering benefits to the partners of all state employees in 1999.

While Proposition 22 was passed in 2000 banning same-sex marriages, it was quickly struck down by the courts. However, several months later, the now-infamous Prop 8 was passed. While it was overturned, the fight to do so became a rallying point for the LGBT community, especially those in California.

Since 2003, LGBT couples have had the right to adopt in the state. Lesbian couples have been able to take advantage of artificial insemination for much longer—since 1976.

State law provides for a large number of legal protections, including protecting all LGBT citizens from discrimination in housing, employment, and credit. Sexual orientation is recognized as a protected class. No public utility company or institution can discriminate on the basis of orientation, either. While protections for sexual orientation were added to laws in 1992 and 2000, it wasn’t until 2004 that gender identity was added.

Both sexual orientation and gender identity are listed in the state’s hate crime laws.

Transgender individuals can request a new birth certificate with the gender of their choosing without having sex reassignment surgery, and as of 2014, the death certificate must also reflect their gender expression.

California has been the first state to pass a number of LGBT-related laws. In 2007, the state became the first to allow same-sex conjugal visits to inmates in prison provided the two were married or registered as domestic partners before incarceration. In 2011, the FAIR Education Act was passed, requiring textbooks to include the contributions of a number of different categories of people, including those of the LGBT community.